Since Assisi was already separated, washed, and easy to walk, I had the brilliant idea (!) to walk her in the Wheeling Homecoming parade.  The parade theme was "Happy, happy Wheeling."  Since I don't watch TV, that brought to mind clowns and balloons; E.P. makes balloon animals and enjoys making and selling them...so I thought the Wheeling Homecoming might be a fun time for him.  But the family had plenty of plans and declined.  So I proceeded to call and see if another family with kids might have a child or two who would like to walk in the parade.  The Howes thought that Hunter MIGHT, so I went to Chilli and got markers, poster board and 2 little flags and wrote "A happy, happy Wheeling needs a healthy, healthy USA" and registered the entry.  I used a red/white/blue lead rope and placed a  little flag in the halter between her ears. I wore a flag shirt and carried the sign and the other little flag. Assisi, the Babydoll, walked perfectly and many kids at the Homecoming wanted to pet her. The recruited Hunter did want to lead her and did fine.  So the experience was successful overall, even though decided on very quickly.  Thank goodness the day was not as hot as Saturday!  One picture of the three of us during the parade.  And one of Assisi afterwards. 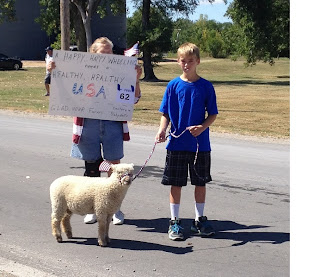 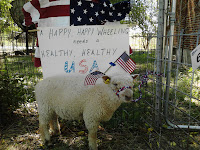 Posted by gladhourfarm at 2:28 PM No comments:

Once again E.P. and I went to this event.  This time I showed Xen in Lead Line before he was picked up by the folks buying him (and thank you to new owners!), while E.P. showed Assisi in all events:  Lead Line, Babydoll class, Babydoll champion, Champion Ewe Lamb Drive, and Showmanship.  This year the weather was HOT!  This likely affected the attendance at the Bethel event negatively.  We had a decent time and a good lamb-kabob for lunch.  Assisi behaved admirably after her first less-great appearance during the Lead Line event when she had to be carried.  After that, after E.P. walked her enough for her to be used to him, she was GREAT!  Some pix follow.

Posted by gladhourfarm at 2:14 PM No comments: