June 3, 2013.  Alas, a lot of time (really?) has passed since my last blog post.  (I even found my January blogspot in drafts, unpublished, waiting for me to add a couple pictures.)  A bunch of cuties have been born this spring.  Here are a few pictures of babies, happenings, animals for sale:

Sheep first!
I had my first lamb triplets this year! 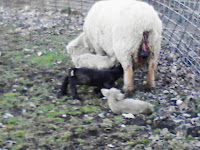 Surprising event--We had a snow in MAY! I titled this "I ain't dumb!"  for the lambs found a spot to get in out of the weather. 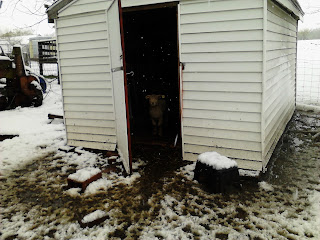 What I have available now is 2 rams and 6 females to sell.  I would like to keep a couple lambs and sell the yearlings out of the same ewes instead.  I am interested in having fewer lambs next year but I want to keep my adults so this is a way that I can give a buyer a boost and keep my production lower, I think.  I have a ram or two to go with some of the females.  Both black rams I would sell are ones I would keep and use, but I would like to have a white ram to breed my original white dam before she is too old and only prefer to have two rams at a time.  So I'm looking for a particular kind of white one.  My little ewe lambs this year are so cute and so shapely!  Next possible show, early July, is only for under-21, though, and my kids who have been working with the cattle may not be able to go, much less add sheep to their efforts--but I would really like these ewe lambs to be shown!

Lots of cute calves too.  And plenty of bulls and heifers to sell, breeding pairs and breeding triplets.  Have found that my milking stanchion is often very helpful and have brought several heifers in to eat in it and be more easily trained.  Have a good bit of A2 genes in my herd so those wanting a milk cow might be able to get one, but I am not testing everything at once--too costly!!!!!!

I have "some of everything" to sell.  I have a traditional bull, Legacy-approved.
This bull is by Trillium Cluny by AI and out of Zodiac's P-Bar Ida.  Around 2004 I was seeking heavily Woodmagic animals to try to build a "mini-Woodmagic" on this side of the Atlantic.  I bought several old line Woodmagic females and one bull.  Alas, "Clunyson"  is my only offspring from all those buys and all that effort.  I finally have one heifer by Clunyson out of a Colorado cow that I bought from the Davises in DE during that time as well.  Now I want to extend out to some other old-line bulls with my two females, so am ready to let Clunyson go.  He is PHA and chondro-free, dun and good-looking. Not so many of these traditional animals to be had, so if that is your interest, please contact me about him.  [Update 6-24-13:  Clunyson is SOLD.  Thank you to the new owners, who intend to use him to produce Legacy-approved animals--Yay!!!]

I also have a homozygous polled black bull available to sell.  He carries neither red nor dun.  Is PHA and chondro-free.


Also available is the homozygous polled red Kaelan shown in earlier posts (who looks better now since he's been on pasture for some months).

I have Xugar and X-Rall red polled bulls available for sale from 2010.  Both have been sire-confirmed to Preference and X-Rall confirmed to both parents, meaning that he must be A2/A2.  Xugar's dam is not yet tested for A2, but both boys are chondro and PHA-free.

The little guy I really intended to take to the national ADCA show this year is from sire and dam that are chondro and PHA-free, but he is quite short.  I believe that he is homozygous dun and homyzygous red, so that would mean that whichever color of cow he was bred to would have that color calf if/even if she didn't carry the other color.  His half sister was the Mature Cow Division winner in the 2007 ADCA national video show and his dam came in just behind his sister in a good-sized class.  His name is Gladhour Xtubhen O'Rol, another 2010 polled bull. Such a cutie!
And I have available for sale young 2012 black or red polled bulls that are very sweet, similar in laidback temperament to their sire, SF Preference, and some from Gladhour Raymore or  SGF ANT Kaelan, other desirable sires. 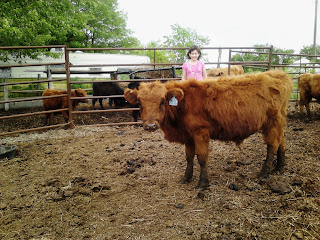 There are plenty (and I do mean SEVERAL) red polled boys to choose from that have just been born this year.  As buyers are told, if you choose one and put down a deposit before they are weaned I will do the training, up to haltering, to the level you choose for no extra charge.  If they pass weaning, then you get the kind of training I prefer for myself or manage within the pasture.  Most of my bulls are pettable but not moved by halter.  The ones we will be training for show, though, will be halter-trained.


Posted by gladhourfarm at 6:00 AM No comments:

Almost missed January, huh?  Well, to update...the Thanksgiving homestays happened and were a blessing to families and students.  The Christmas holidays came and went with many activities.  Winter is HERE, but other than needing hay and having the extra efforts that winter brings, it hasn't been too bad a winter here so far.

Right now, I have some appointments for meat.  The processors have been completely swamped for many weeks in this area, it seems.  Do you suppose it is because people think meat prices will go up so they are stocking up?  It is not the best time for harvest, but I have some ready and some meat buyers who have spoken for some.  So things are set up with two different processors.  The veal calves will go to USDA processor so that I can sell the ones that are not currently ordered.  The buyers of my larger animals decided to buy the large animals on the hoof so they will get "custom" work on their orders.  Handy for them (and less expensive) and easier for me too.

But now to my greater love:  matching buyers and animals for breeding stock.  From my Dexters, both Raymore and Wrrayence went to new homes since my last blog.  Raymore was a wonderful bull for me and great-looking.  Wrrayence has so much potential and a sweet personality.  Here are pictures of both of them, and a thank you to their new owners!

I have several bulls for sale right now including  Xugar O'Pref, a red polled;
WeeMustRayt, a black polled by Raymore;

and both horned and polled younger boys.  I also have some proven herd sires that I would let go to the right home.


Another piece of news is the homozygous polled test that has just come out, available at UC-Davis.  This will make it possible for people who want to deal with only polled calves to have their wish in Dexters without experimenting so.  However, I personally intend to keep a polled herd and a horned herd as I want to retain the traditional Dexters along with having the polled that I originally thought were best, keeping the individual animals that I love most.
Posted by gladhourfarm at 11:25 PM No comments: